A few days after their releases, we present two of the best 2017 smartphones: Google Pixel 2 XL and iPhone X. After launching the new iPhone X, Google launched its new top of the line product. At this point, it is good to make a comparison between the two smartphones to understand their potential and their differences. Continue reading to know more. 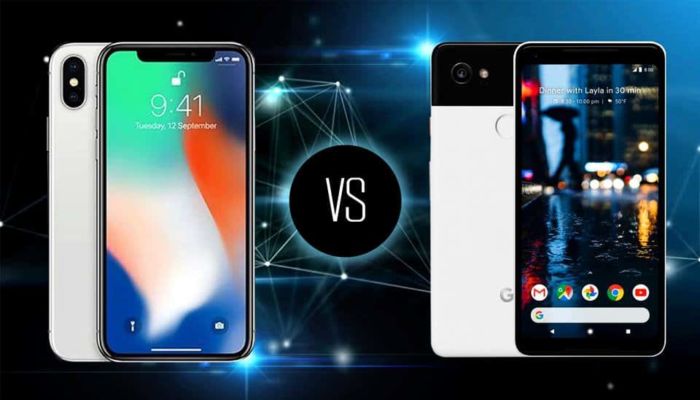 The iPhone X has a 5.8-inch bezel display, called Super Retina, with OLED technology and 1125x2436 pixel Full HD + resolution, allowing you to have more brightness and color accuracy than any previous iPhone. Google Pixel 2 XL, on the other hand, is not part of the "full screen" smartphone category but has a 6-inch P-OLED display with a 1440x2880 pixel Quad HD + resolution, currently the highest in circulation!

Moving on to the camera, the iPhone X has a twin camera with twin 12 megapixel sensor and optical stabilizer and a 7 megapixel front camera. Google Pixel 2 XL has a 12.2 Megapixel camera, also with optical stabilizer and an 8 megapixel front camera. In this field, Google has surpassed all competitors by developing a technology that maximises the single camera and does not need a dual camera to get a really good quality photos.

The iPhone X mounts an Apple A11 exa-core processor, a processor that provides much higher performance than its predecessors. The RAM is 3 GB with 64, 256 and 512 GB internal memory that can not be expanded. Google Pixel 2 XL, on the other hand, has a Qualcomm Snapdragon 835 octa-core processor, which delivers really cool performance. The RAM is 4 GB, while the internal memory is 64 or 128 GB and can not be expanded.

As far as hardware is concerned, the iPhone X has the back completely in glass, allowing you to use wireless charging. The smartphone's edges are made from stainless steel and give this jewel some elegance. The Home button disappears and the display lights up simply by touching the screen. The side button instead is dedicated to Siri. Google Pixel 2 Xl is higher, giving you a lower level of maneuverability. However, these dimensions are justified by a 3520mAh battery which guarantees a great autonomy and the presence of two front stereo speakers that offer superior audio power to all other competitors. Obviously making a choice is really complicated when it comes to two so advanced smartphones. Both offer top-notch performance and a unique design that anyone would like to own. However, they both have something in common: they are delicate devices and need the right protection! That's why we at GoCustomized offer you the ability to buy custom covers for your devices so that you can handle them in complete safety. In our web store there are already cases for the new iPhone X and soon more will come.

Which of these two smartphones do you prefer? Let me know by leaving a comment!